Southeast Asia is a growing, full of potential, yet contested region. The population of Southeast Asian countries combined makes the world’s third-largest market. However, the region also struggles to address its economic, social, and political problems. The complexity of the region requires us to learn and understand issues facing the region more in-depth.

ASEAN Studies Center Universitas Gadjah Mada just concluded a series of online movie screening events, Bincang ASEAN, titled Reading, Learning, Investigating Southeast Asia through Movies (also known as ReaLISM). Through interesting engagements with filmmakers and experts in Southeast Asian countries, not only did ReaLISM deepen the audience’s understanding of the issues in the region, but it also enabled the audience to discuss the issues more critically. Acknowledging documentaries as a representational medium, audiences do not only take for granted the (re)construction of reality in the past as represented in documentaries. They also have the capacity to imagine the present and the future concerning realities (re)constructed in documentaries.

To have a closer look at the region’s issues, ReaLISM successfully screened three documentaries in three different Southeast Asian countries. The three screened documentaries are Standing on the Edge of a Thorn: A Family in Rural Indonesia (Robert Lamelson, Indonesia, 2012); SITTWE(Jeanne Hallacy, Myanmar, 2017); and An Online Citizen (Calum Stuart, Singapore, 2019), respectively. Considered participatory documentaries, while these three movies zoomed in to the reality of the documentary’s subjects, filmmakers are also included within the narratives.

These three movies represented the complexity and diversity of issues in the region. Lamelson (2012) through his documentary, represents the life of a family in rural Indonesia grappling with poverty, mental health, and the sex trade. Through SITTW, Hallacy (2017) exposed the dynamics of ethnic conflict in Sittwe, the capital of Rakhine state in Myanmar, through the lens of two youths representing both opposing sides. Meanwhile, Stuart’s (2019) an Online Citizen documented a story of an independent online journalist in Singapore fighting for freedom of the press amid the rise of authoritarianism

In this circumstance, making sense of Southeast Asia means looking at the everyday reality of individuals (re)constructed in each documentary and to the ways in which their reality reflects a broader picture of Southeast Asia. What did these movies tell us? At least there are three things we learned from the three movies. 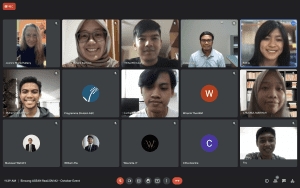 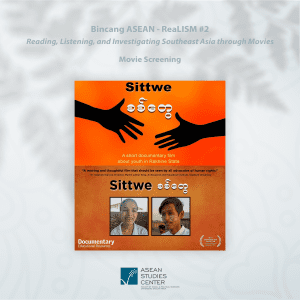 In the past and local, yet now and regional

Documented within a certain timeframe in the past, we should recognize the temporal dimension of the issues represented in the three documentaries. Considering the temporal aspect of the realities of those individuals filmed in the movies, one might ask them what is happening now (or would happen in the future).

In this case, one of the three filmmakers, Lamelson, recently came back to Indonesia and filmed the subjects of his documentary Standing on the Edge of a Thorn to discover what happened to the family in 2012. During the documentary discussion, Lamelson conveyed that what happened to the family in 2012 is something that he wouldn’t have thought of before. The mother (Tri) chose to leave her husband (Iman) for someone else; Iman remarried a 16-year-old girl in the village, and the daughter (Lisa) got married to a guy she met on social media. While Standing on the Edge of a Thorn captured the issues of poverty, poor mental health, and the sex trade which grappled by the family, the family appeared to be happier since 2012, although other issues such as divorce and child marriage occur.

Not only should we take into account the temporal dimension of documentaries, but we should also consider their spatial dimension. Documented specifically in a particular geographical location within three Southeast Asian counties (Indonesia, Myanmar, and Singapore), the issues represented in the movies are situated locally. However, issues such as poverty, poor mental health, sex trade, ethnic conflicts, and declining freedom of the press are certainly not exclusive problems specific to these geographical locations. Rather, these issues are regional (or even global) issues. For instance, Stuart expressed that declining freedom of the press appears to be a global issue facing journalists worldwide. Budi Irawanto, one of the discussants in ReaLISM #3, compared the issue in the context of Indonesia. He explained that the Information and Electronic Transactions Law (also known as UU ITE) had been used to criminalize journalists.

The second lesson learned from ReaLISM to make sense of Southeast Asia is that education plays a key role in social change in the region. In discussing her documentary SITTWE, Hallacy pointed out that lack of education (read: illiteracy) became a prominent cause of ethnic conflicts in Myanmar. Thiha, a youth activist from Myanmar, discussed the conflict trajectories and explained how disseminating (mis/dis)information had triggered the conflict. Information literacy is therefore important to prevent conflicts in the future.

The importance of education for social change is also echoed in Standing on the Edge of a Thorn. Approaching the end of the documentary, the daughter (Lisa) voiced her hope of making a better future for herself and her family after pursuing higher education.

A similar theme across the three documentaries that the audiences engaged with is a reflection on ASEAN’s presence (or absence) in addressing the issues. This critical assessment matters because ASEAN is well-known as an intergovernmental organization in the region. The role of ASEAN has been particularly explored in discussing SITTWE by Irawan Jati, a scholar in ASEAN studies. He claimed that with the fundamental principle of national sovereignty in ASEAN, such a regional institutional arrangement is difficult to play a key role in conflict resolution.

Meanwhile, the exploration of ASEAN’s role appears to be lacking (or absent) in the discussion of two other movies. This, too, shows that ASEAN does not play a significant role in addressing the issues represented in the documentaries, although ASEAN has established, adopted, and developed institutional arrangements, declarations, conventions, regional plans of action in relations to poverty, child abuse, gender inequality, and even protection of human rights.