Taliban’s recent victory in Afghanistan, marked by US troops withdrawal and the fall of Kabul, may present proof of its success in managing and dominating various strategic sectors that contribute to its victory, with no exception in finances. Taliban’s finances have often been associated with its involvement in the international illicit drug trade along the Golden Crescent, which also presented a possibility to be traced to the Golden Triangle. With such an assumption, it raised an urgency to review the securitization of the Golden Triangle, a region well-known for its vast history of the opium trade.

Based on a study by the United States Institute of Peace, the Taliban finances its operation through the trade of opium poppy that prevails in the southern region of Afghanistan, which is later being processed into heroin as the final product (Peters, 2009). Both direct and indirect means of opium trade are being employed to finance the Taliban’s operation. Aside from being directly involved with the traffickers, the Taliban also taxed opium harvesters in the area it controlled. As supporting evidence, interestingly, the study shows how the Taliban made opium as local currency in the region amidst scarcity of cash, being bartered for commodities to support their cause such as weapons, construction materials, vehicles, electronics, etc. (Peters, 2009, p. 25).

As a consequence of the Taliban’s dependence on opium to finance its operation, it is not a surprise if opium trade prevails around Afghanistan borders, not in exception with the influence of Afghan opiates in the Golden Triangle – a region where illicit drug trade prevails, just some approximately 3500km to the east of the Golden Crescent. Despite a decline in opiates production in the area in the 1990s, a record shows that Afghan-made heroin has met the rapidly increasing Chinese demand. And the inbound opiates to China from the Golden Triangle were traced to originated from Afghanistan (UNODC, 2010, p. 46). That proves that the Golden Triangle is still acting as an active route for the opium-based illicit drug trade and is linked to the Taliban. Thus, it signifies the urgency to review the securitization of the area.

Before this discovery, in its effort to curb drug trafficking in the Southeast Asian region, ASEAN has established various securitization efforts through cooperation with various entities ranging from state to non-state actors. In 1976 it successfully agreed on the ASEAN Declaration on Principles to Combat the Abuse of Narcotics Drugs spearheaded by the ASOD (ASEAN Senior Officials on Drugs Matter), contributing to the decline of drug trafficking in the Golden Triangle area in the 1990s. Recently, in 2018, as a continuation of the ASEAN Cooperation Plan to Tackle Illicit Drug Production and Trafficking in the Golden Triangle 2017-2019, cross-border cooperation has increased to counter the illicit drug trade in the area. Bordering ASEAN member states (Lao PDR, Myanmar, and Thailand) alongside the UNODC (United Nations Office on Drugs and Crime) established border liaison offices allowing the exchange of intelligence that on one occasion successfully seized 4.3 million tablets of methamphetamine (United Nations Office on Drugs and Crime, 2019, p. 17).

Despite those established efforts, however, several new initiatives have to be made to consolidate the securitization of the area, considering the recent geopolitical update. Based on an assessment of the illicit drug trade supply chain: the producer, the distributor, and the consumer, three measures can be taken. First, it may be necessary for ASEAN to initiate communication channels with the Taliban regardless of formal recognition considering their current control of the status quo in Afghanistan. By initiating communication channels, ASEAN can spearhead international efforts to hold the Taliban accountable towards global efforts in countering illicit drug trade, particularly trafficking to the Southeast Asian region, and pressuring for its commitment to reduce its financial dependency on opium cultivation. 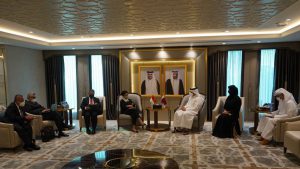 Second, considering Myanmar is the leading supplier for East and Southeast Asia and the second-largest producer of opiates after Afghanistan despite the decline in production in the 1990s (Danastri, 2018, p. 31), ASEAN response towards the delicate situation in Myanmar should also touch on the issue of securitization of the Golden Triangle to tackle the chain of distribution and re-clarify the junta commitment in countering Myanmar’s domestic production of opiates. ASEAN’s approach to Myanmar regarding the securitization effort should result in an outcome where ASOD and UNODC’s agents gain safe access to the area to enforce actions in countering illicit drug trade, in which to a greater extent reviewing Myanmar’s opium production and trace its link to Afghan produced opium.

Finally, as most heroin demands originate from China, cooperation with Chinese authorities to counter drug trafficking should be strengthened. Even though China has invested heavily in efforts to securitize the Golden Triangle from the non-traditional security threat (Permanent Mission of the People’s Republic of China to the United Nations and Other International Organizations in Vienna), ASEAN should still push China to be more proactive, notably in curbing its domestic heroin demand and in law enforcement towards potential re-distribution routes to the global supply chain. Moreover, ASEAN’s cooperation with China should explore the possibility of China becoming an intermediary to pressure the Taliban, considering that China has more engagement with the group. Thus, in its future engagement with China, ASEAN should address ASEAN’s position and interest regarding the Taliban’s victory implication to the illicit drug trade in the region.

Taking all of this into account, the Taliban’s recent victory and the uncertainties in its commitment to reduce its dependence on the illicit drug trade to finance its activities has imposed regional actors around the Golden Triangle with uncertainties in efforts to counter the illicit trade. Despite it being too premature to conclude the Taliban’s victory implication towards the region’s anti-narcotic efforts, it may be necessary for ASEAN as a key actor in the Golden Triangle to remain vigilant and responsive to any development on the issue. This is very much necessary as the Taliban’s attachment towards illicit drug trade may disrupt ASEAN’s decades-long effort in securitizing the area, not to mention if the Taliban’s rule of Afghanistan strengthens the country’s position as a narco-state. Furthermore, securitization efforts should also address intra-ASEAN challenges and enhance cooperation with other parties at stake. Re-affirming Myanmar’s position would allow further action in enforcing the securitization effort in the area. At the same time, cooperation with China should result in a decline in opium-based substances demands and gateway to pressure the Taliban.