Bincang ASEAN is a monthly discussion held by ASEAN Studies Center, Faculty of Social and Political Sciences, Universitas Gadjah Mada (ASC) which aims to discuss the contemporary issues of ASEAN and Southeast Asia. By inviting ASEAN scholars both practitioners and academics, the participants are expected to gain a better understanding of ASEAN from an interdisciplinary perspective. 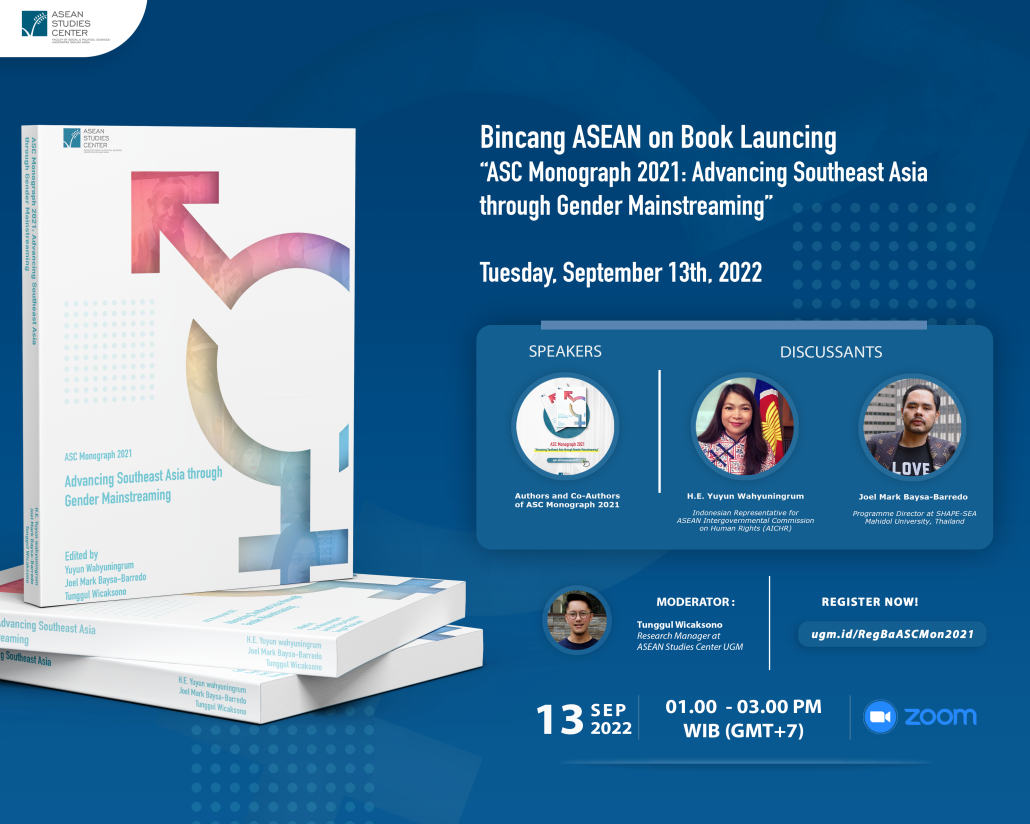 On Tuesday, September 13th, 2022, the ASEAN Studies Center held a webinar series on Bincang ASEAN to launch the latest publication by the center entitled ASC Monograph 2021: Advancing Southeast Asia through Gender Mainstreaming. The webinar is purposed to disseminate the publication and discuss gender mainstreaming efforts in Southeast Asia. All contributors to the monograph will be invited to the webinar to discuss their findings and complete the discourses of Southeast Asia’s effort in mainstreaming gender alongside the editor and the audience. 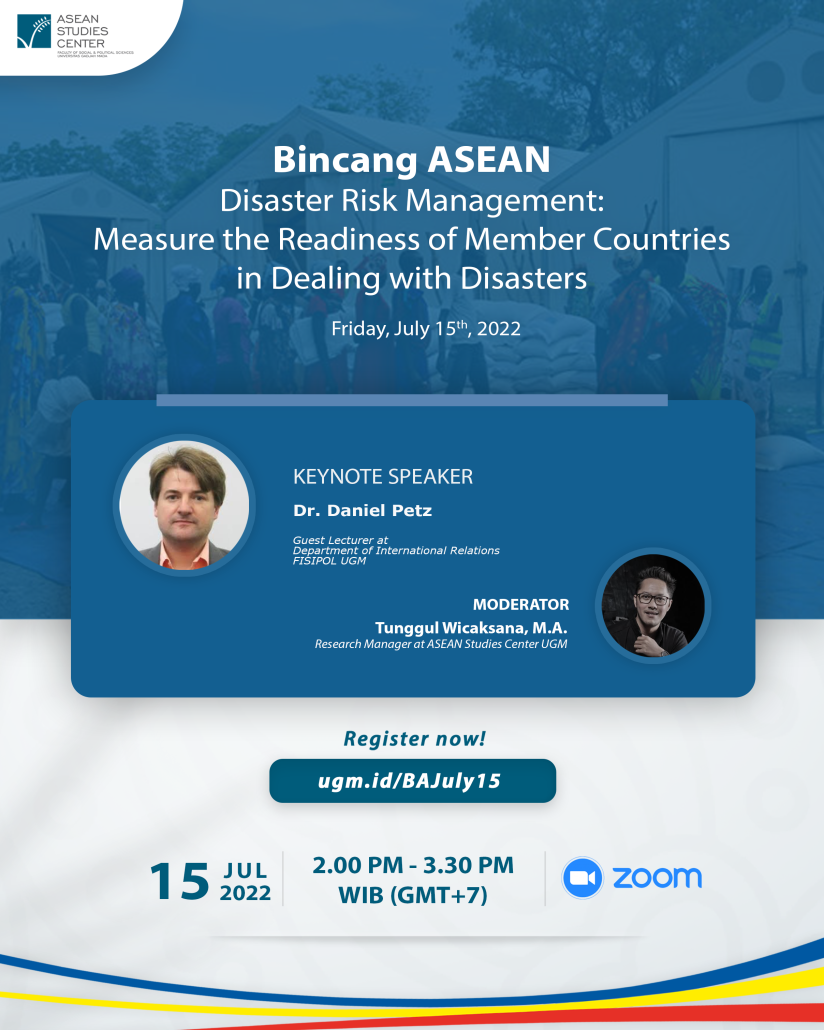 Bincang ASEAN on Disaster Risk Management: Measure the Readiness of Member Countries in Dealing with Disasters

Discussion on Disaster Risk Management (DRM) in ASEAN actually started in the 1970s. This is indicated by the presence of the Declaration of ASEAN Concord 1 in 1976 and the Declaration on Mutual Assistance on Natural Disasters (Petz, 2014). Over time, the ASEAN region experienced various disasters that resulted in losses in various forms. This certainly needs to be taken into account by various parties, especially in order to increase the capacity of member countries in dealing with disasters. Disaster risk reduction is one of ASEAN’s top priorities to ensure that the region will achieve the Sendai Framework for Disaster Risk Reduction (SFDRR) and Sustainable Development Goals targets by 2030. The ASEAN Agreement on Disaster Management and Emergency Response (AADMER) forms the backbone of policy for ASEAN Member States to enhance their collective efforts in reducing disaster risk and responding to disasters in the region (ASEAN, n.d.). 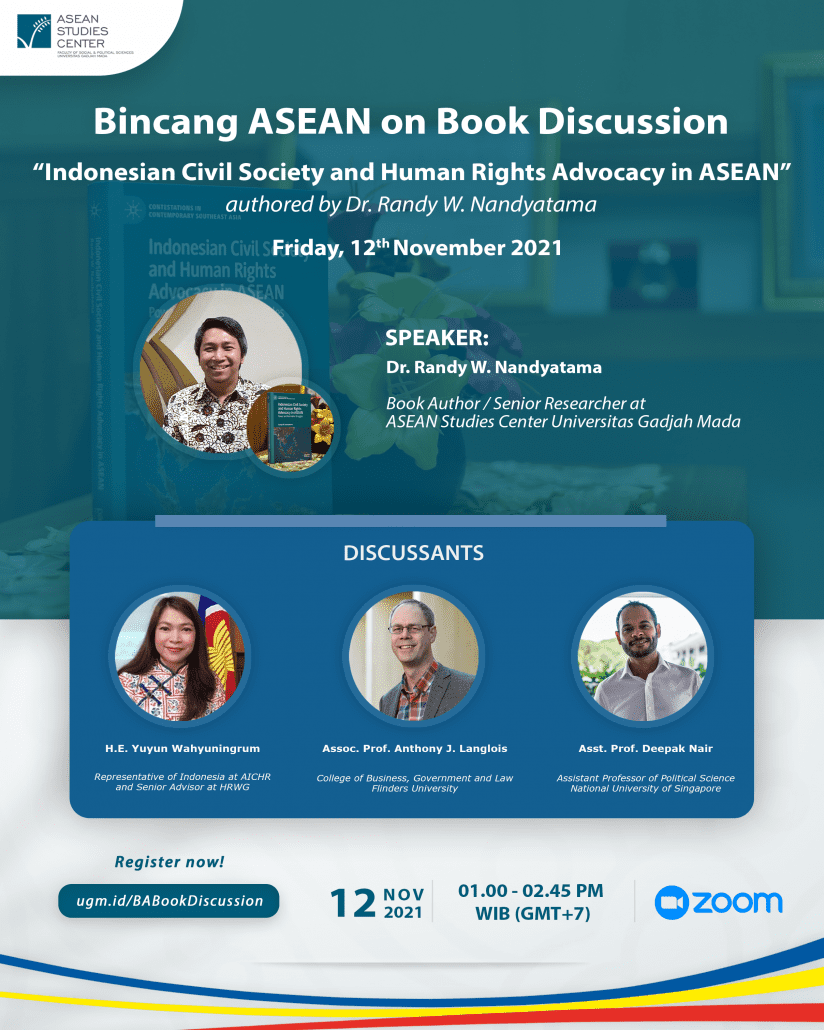 The ASEAN’s state centrist is challenged by civil society demands for its greater openness to Southeast Asia regionalism. The CSOs are one of the actors that play significant roles to tackle human rights issues especially at the grassroots level that often becomes a blind spot for ASEAN. In this book, Mr. Randy Nandyatama explains comprehensively how the CSO’s in Southeast Asia plays their roles to advocate the human rights issue through the lens constructivism and Bordieus field theory. Mr. Randy also explains about how the CSOs deal with the existing doxa in ASEAN and its strategies to advocate the human rights issues. 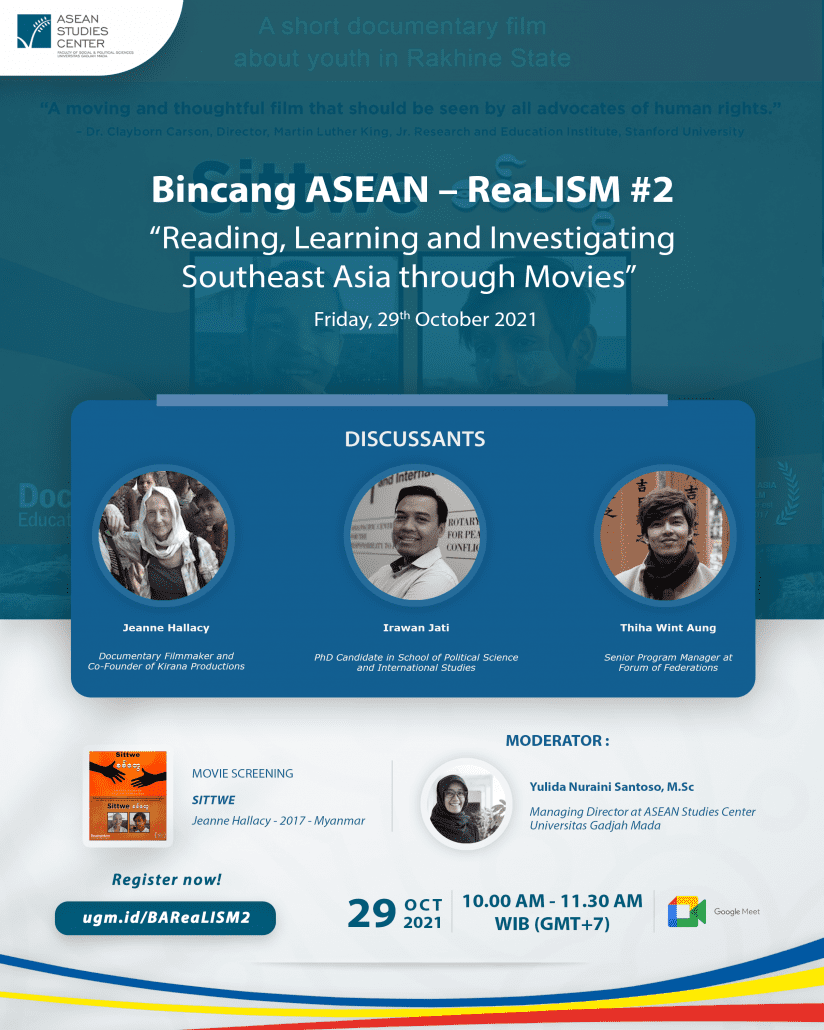 The 2nd series of Bincang ASEAN ReaLISM this time featured a documentary film that has story about two teenagers from opposing sides of deadly religious and ethnic conflict in Myanmar. Entitled “SITTWE”, the film gives voice to the youth in a deeply divided society, to create space for dialogue about reconciliation. In 2017, “SITTWE” was awarded as best Awarded Best Southeast Asia Short Documentary in Freedom Film Festival, Malaysia. It also has screened in Hong Kong Human Rights Festival, 2018.

This time, the screening invited several discussants to enliven the discussion, which are Jeanne Hallacy as the movie director of SITTWE, Irawan Jati as the academician, and Thiha Wint Aung as the representative of the youth from Myanmar. 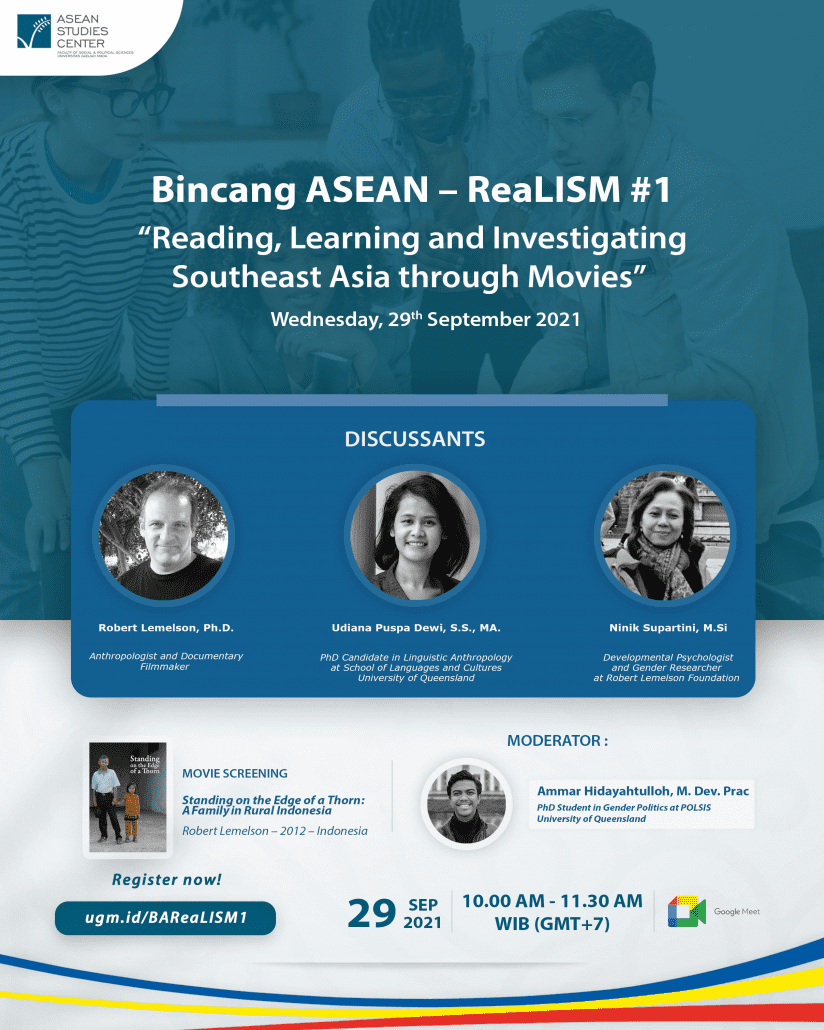 The first Bincang ASEAN – ReaLISM series presented a documentary screening of “Standing on the Edge of a Thorn: A Family in Rural Indonesia” (2012). This documentary represents complex social issues facing a family in Gunung Kidul, Indonesia. The first Bincang ASEAN – ReaLISM series will offer a space for participants and experts to engage with a currently debated bill on the elimination of sexual violence in Indonesia advocated by more progressive women’s movements and to open a conversation on the bill of family resilience that was rejected by the legislative body in the Indonesian parliament last year. Nevertheless, participants are also encouraged to discuss other relevant issues facing their communities and to offer potential solutions for social change.

Young people are playing a growing role in the ASEAN community and the common ASEAN identity. For example, over the last year, student-led protests have taken center stage in ASEAN’s most salient political events. However, there are many other ways to foster youth involvement other than activism, all of which are important. All forms of youth empowerment encourage young people to take action in their lives and in their local, regional, or national communities to solve problems and ensure a better future for themselves and others. This is immensely important not only to the health of a generation but also for ensuring a healthy future for the ASEAN region. Youth empowerment can increase a sense of youth efficacy in the population and improve the relationship and communication between ASEAN itself and young members of the public as well, helping to inform policy decisions and ASEAN affairs.

Myanmar Protests and Unrest : A Test of ASEAN Diplomacy

ASEAN is now facing tremendous pressure by the international community who are criticising it for not issuing a fast enough response, despite the open conflict, aggressive use of force, and violation of human rights happening within its own backyard. Two months after the tensions, ASEAN member states plan to engage in a crisis meeting in the upcoming weeks. With casualties and fatalities rising, member states must act fast.

The Bincang ASEAN: “Myanmar Protests and Unrest: A Test of ASEAN Diplomacy” is expected to delve into the ongoing crisis in Myanmar and discuss urgent topics related to the recent coup from a human rights and diplomacy perspective. In this series of webinar, we invite Dr. Rizal Sukma, a senior researcher at CSIS alongside with Nicolas Jude Martínez from Global Campus Coalition for Human Rights and representative of #FreeSawlin Campaign Movement

What explains the different approaches and outcomes in Covid-19 responses in ASEAN member states, and what has been done by ASEAN and its member states to tackle this global pandemic problem effectively? ASC Monograph 2020 tackles these questions by bringing about a regional and cross-national perspective to understand the Covid-19 response. Seven essays in the monograph show that three aspects explain the inequality of Covid-19 responses in Southeast Asia: the differing degree of state capacity, the resilience of society, and the regional cooperation. There is a range of issues discussed in the monograph: Vietnam’s strong Covid-19 response, Thailand’s digital resilience, and human security problems in Indonesia’s Covid-19 response. There are also cross-national issues such as the problem of migrant workers in Thailand and Malaysia, and ASEAN’s institutional framework for disease control and prevention.