The maritime element widely connected our world. Two-third of the Earth’s surface is covered by sea and ocean. Sea is not only providing huge natural resources which can be explored and exploited but also has a big geopolitical potential to support the distribution and trade between countries and continents. In the current globalized economy, where sea transportation has been so far modernized, the international trading system still uses 90% of the exchanges by using sea transportation (Sciascia: 2016).

Herve Coutau-Begarie (2007) mentioned that the maritime domain has to be considered toward the frame called the “Maritime Triad”. The term was introduced to better understand the classification of the maritime domain, which is classified into three kinds of maritime space. (1) Maritime domain as a space of communication, there could be seen the international trade exchange that still uses the sea transportation, and according to TeleGeography, there is a fact that by more than 99% of international communications by the internet are carried and connected over fiber optic cables under the sea; (2) Maritime domain as a space of resources, the oceans have enormous reserves of energy and natural resources. Not only gas and oil, but the oceans are also a potential energy and renewable resource with a large number of minerals, fisheries, and many unexplored resources; (3) Maritime domain as a space for projection of power, the history shows that the sea has been the field of many wars in the past between countries, this proves how important the sea is for a country as one aspect that can be determined as a power.

The maritime domain can be defined as the surface of Earth covered by sea and littoral areas, and geographically speaking, a “space”. In this specific “multidimensional space” that has been considered a frontier for centuries, human interactions occur, which makes the protection and securitization of the maritime domain a necessity (Parrain: 2012). By it means, the maritime domain is subjected to several violence and threats in its development which could be determined, including but not limited to piracy and armed robbery in the sea. According to the Wikidiff, piracy is the hyponym of the (nautical) robbery at sea, an act of a violation against international law and taking a ship away from the control of those legally entitled to it. But the different meanings of piracy and robbery could be determined based on UNCLOS III Article 101, in which piracy is defined as any illegal acts of violence which occur on high seas and beyond the jurisdiction of any state. Meanwhile, according to Regional Cooperation Agreement on Combating Piracy and Armed Robbery against Ships in Asia (ReCAAP) Article 1, armed robbery against ships is defined as any illegal acts of violence in a place within the contracting party’s jurisdiction over such offenses. By the risks and threats against the maritime domain, maritime security evolved where the Sea Lanes of Communication (SLOC) is the most important or vital object to be protected.

According to Barry Buzan (1991), security in the maritime domain is a major stake for humanity. Moreover, in a world where the concept of security has deeply evolved since the end of the cold war. The threats and risks could also be determined on two conceptions: (1) Traditional threats, traditional maritime security threats in South-East Asia, are preeminent regarding the long history of territorial disputes in the area. Issues related to sovereignty, sovereign rights, and border governance are widely spread. They might threaten the stable situation in the region if not addressed in a good manner by the involved parties, in this case, the concerned states (Sciascia: 2016). Besides, other states excluded in the South-East Asia Region may interfere with the situation and escalated the conflict, such as China with their interest in the South China Sea, where most of the area is located in the South-East Asia Region. (2) Non-traditional threats, different from traditional threats, non-traditional threats cover many aspects of threats and risks. This threat covers more issues to be concerned not limited to a conflict between states, but also non-state actors involved in terrorism, piracy, robbery, illegal fishing, slavery, environmental issues, etc. This article will mainly discuss the conception of non-traditional threats in piracy and armed robbery in South-East Asia, especially amid the world-spread Covid-19 pandemic. 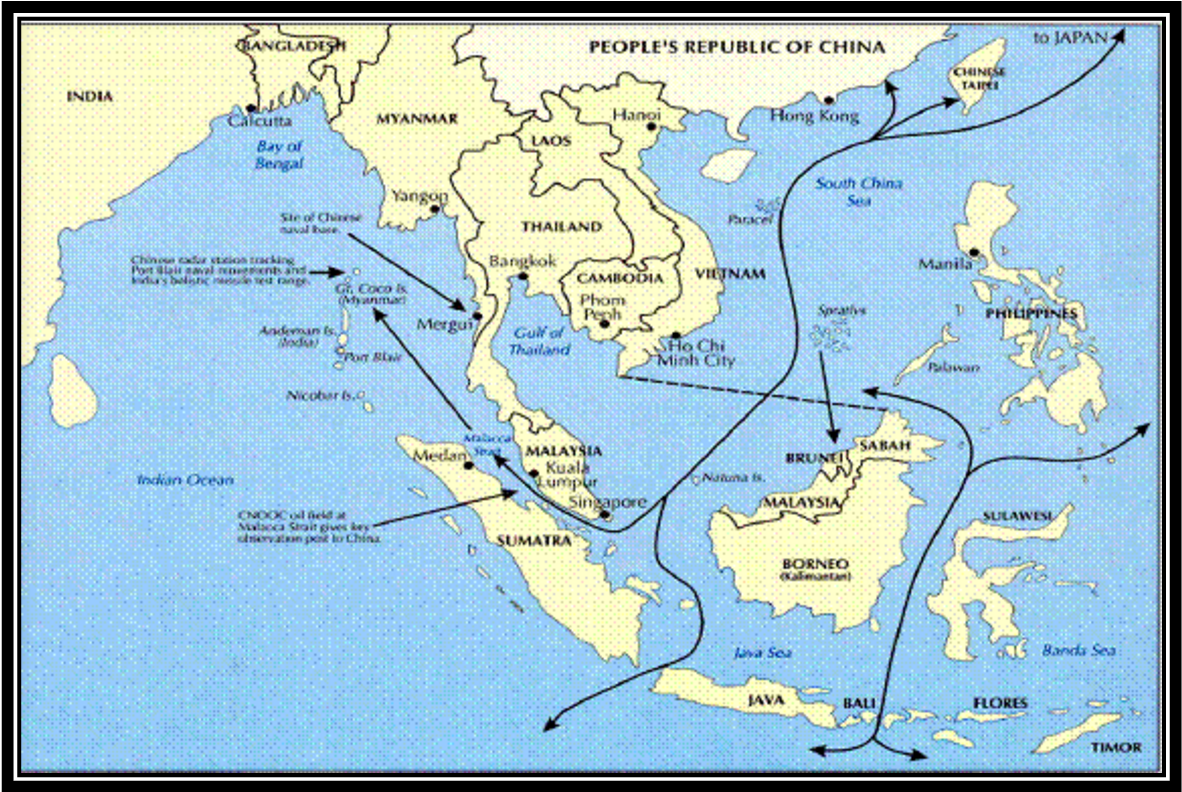 South-East Asia is strategically located at the crossing of the Indian Ocean and the South China Sea and between two continents Australia and Asia. South-East Asia, as we know, have two countries, Indonesia and The Philippines that are archipelagic, Myanmar that adjacent directly to the Indian Ocean, Singapore, and Malaysia is located at the crossroads between the Malacca Strait and the South China Sea, then Vietnam and Brunei Darussalam are adjacent to the South China Sea. The region is home of importance oceans, seas, and straits that formed one of the busiest international Sea Lanes of Communications (SLOCs). Those facts above make the international trade between countries by the sea transportation revolving frequently in this region.

Since the 1990s, South-East Asia has been considered the target area where piracy and armed robbery conduct against international law. Indonesia, Thailand, Singapore, and Malaysia have initiated the joint patrol program in Malacca Straits, namely Malacca Straits Patrol, to tackle piracy in South-East Asia. Nevertheless, according to safety4sea.com, new types of crimes may have occurred. High-value tankers can be targets if cybercriminals receive information from company servers or ship officials are complicit and give up information to pirates about the ship’s position or the cargo on board. On a side note, insurance fraud is common, with vessels submitting fake reports of attacks to get insurance pay-outs.

According to the European Institute of Asian Studies, a number of the piracy and robbery activity in Southeast Asia has traditionally been concentrated around the vitally important Strait of Malacca shipping artery. The impact of the 2004 tsunami (which destroyed many pirate hideouts and small vessels in the area), along with effective counter-piracy measures undertaken in the Strait since 2005, has shifted the focus of these activities towards the coasts of Singapore and Malaysia, and in particular to other sections of the traditionally risky Indonesian waters.

Until now, piracy and robbery activities in the Southeast Asia Region have not been properly resolved by countries involved in the protection of the sea lanes of communication. In 2020, following the Covid-19 pandemic that affects the development of further economic in South-East Asia into desperation, the number of piracy and armed robbery at sea cases in the Singapore Strait hit its highest mark in half a decade, with its 34 incidents forming the bulk of cases in Asia’s waters in the year. Based on the article in the Critical Maritime Routes Programme, as a matter of facts, highlighted by ReCAAP ISC Executive Director Masafumi Kuroki at the 12th Nautical Forum on 15 January 2021, there was a significant increase in ‘actual incidents’ of piracy last year (+17% compared to 2019) in South-East Asia. The most worrisome aspect of this development is that incidents have increased in various locations, such as Bangladesh, India, the Philippines, Viet Nam, the South China Sea, and the Singapore Strait. The broad range of these locations is emblematic of the regional scope of the problem.

In a pandemic situation that spreads worldwide, communication and distribution of humanitarian and logistical assistance from one country to another for handling the virus outbreaks also enliven international sea trade routes. Moreover, following the economic crises caused by the pandemic raises social symptoms, increasing the criminality rate. The SLOCs are inseparable from this situation, the crime rate caused by the high unemployment rate, forcing coastal communities to turn to crime as a means to fund themselves and their families. Some of the funds to conduct patrols in marine areas prone to piracy and robbery are being cut to overcome the pandemic. This is a dilemma that must be wisely decided and determined by the government.

The situation on protecting and securing the SLOCs in South-East Asia concerned the states in the region and states that conduct the international trade exchanges by sea transportation through South-East Asia. For instance, the European Union eek more active involvement in activities ensuring smooth trade and securitization of the SLOCs. According to the Critical Maritime Routes Programme, the current EU-ASEAN Plan of Action reaffirms the importance of strengthened cooperation on maritime security issues, such as in combatting sea piracy, armed robbery against ships, as well as encouraging cooperation to address the maritime-related problems comprehensively. In 2003, the Proliferation Security Initiative (PSI), which was proposed and sponsored by the United States to help the securitization of the SLOCs in South-East Asia, was rejected by Indonesia. The initiative was argued that it might interfere with the state’s sovereignty and potentially threaten Indonesian security (Sciascia: 2016).

So, what is the best way to overcome this issue and wisely protect the SLOCs, while the pandemic situation must end? Combating piracy is consequently a difficult herculean task. Beyond the joint patrol system to the prone sea areas of piracy and robbery, it requires the implication of wise and strong policy by the government. The cooperation and coordination include but are not limited to the states in the region, the external actors (states outside the region), even if it is possible to involve the international organization to promote communication and information exchanges to guarantee security and freedom of shipping overseas. The international coordination mechanism should be conducted properly and avoid the intervention to areas that could increase the tension and escalate the conflict between actors. The cooperation between the actors and stakeholders does not mean and need the same role and responsibilities in the securitization of the maritime domain, or specifically the SLOCs. Every actor and stakeholder have their respective portions and roles in achieving the goal of the securitizations.