The ASEAN Studies Center of Universitas Gadjah Mada, with the sipport of the Netherlands Embassy in Jakarta has conducted a series of discussions regarding the ASEAN Commission on the Protection of the Rights of Women and Children (ACWC) to map possible engagement efforts with the aim of strengthening the promotion and protection of women and children in the region. The series of discussions have commenced since October 2020 following the commemoration of the 10th anniversary of the ACWC.

On Monday, 30 August 2021 a Public Lecture titled “ASEAN Women and Children Protection through Civil Society and Academic Participation” was held to further map potential roles that CSOs and think tanks can play to further advocate for the of women and children. The Lecture was officially opened by the opening remarks from Dr. Dafri Agussalim as the Executive Director of ASEAN Studies Center UGM, and H.E. Amb. Lambert Grijns as the Ambassador of the Kingdom of The Netherlands to Indonesia, Timor-Leste, and ASEAN. 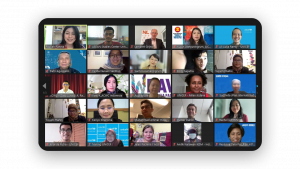 The discussion highlighted a number of issues including the role of CSOs and the academic community which is to support the State in undertaking the obligation as duty bearer in fulfilling the rights of Children, to contribute to CRC Alternative Report CRC in order to support the government efforts on implementing CRC including ensuring child participation, to undertake research on the situation and well-being of women and children, and contribute on implementing Concluding Observation of CRC beneficial as foundation works on measures to child rights realizations.

The academic community can also come together by directing the government towards three main areas of support for women and children: social protection, family support and specialized protection. These points are to be included in policy briefs/suggestions to inform policy makers of an added layer of vulnerability and risk experienced by children due to miscalculated policies.

The importance of participatory approaches was also highlighted during the discussion, especially on issues concerning refugee women and children. The ACWC can play a strategic role in engaging and consolidating the many different fronts and actors to prevent miscalculated policies from being found.