The newest ASEAN Leaders’ Vision encompasses e-commerce as its underlined issue. As its relevancy is in line with the ascendancy of Industrial Revolution 4.0, it has potential as a new track of regional integration. It is inferred that ASEAN not only tries to capture the phenomenon from below, but also manages e-commerce as a significant issue by promulgating the possibility of having newer framework of it. State still hold prominent position in facing this issue. However, it is not free from any obstacles to achieved digital-based integration. The digital divide and the differences of regulation between member states are the significant problem. ASEAN still need the conventional economic development in order to utilize e-commerce as a new mode of business or a tool of integration. An elaborate and detailed regulation needed in order to harmonize regional e-commerce and to involve more local business players –specifically SME–.

Not so recent in April 2018, a statement and communiqué released as the head states of Associations of Southeast Asian Nations ASEAN countries convened the meetings, which is called “ASEAN Leaders’ Vision for a Resilient and Innovative ASEAN.” There are too many things pointed out, one of those is e-commerce. It is said that ASEAN needs to establish a special agreement on it to enhance greater digital connectivity, besides provides the freer movement goods and services.

Many experts are the staunch proponent of mainstream view of ASEAN top-down approach how integration works in ASEAN. State centrality poses as its core. Yet, there is a possibility that digital economy aspect manifested in form of e-commerce as a new trend of integration. It is a fact that e-commerce was not pioneered by the state; instead the private actors made it exist in the first place. In relation with it, the discussion below tries to dig more about the prospects of this innovative track of integration.

Amazon, the first company specialized in e-commerce in the world, was started operating in the early 1990s until the appearance of eBay. Amazon is not only limiting itself on selling books, but also spread its field into several products, such as clothes, electronics, movies, and so on. The existence of internet at that time started to change the mode of how goods and services delivered from producer to consumer. As its boom in the 1990s and early 200s, its recent appearance already made a new turbulence which marked by the dot-com bubble from April 1997 to June 2003.

In ASEAN, e-commerce is considered one of economic sector that just emerged. It is still unknown when the exact time this mode of economy penetrate ASEAN. Its presence approximately existed at late 1990s –it is roughly indicated when e-ASEAN Task Force and its Framework in 1999 promulgated, which will be discussed later–.

Nowadays, e-commerce thrives in ASEAN, especially in several countries, such as Indonesia, Philippines, Malaysia, Singapore, Thailand, and Vietnam. It needs to be underlined the e-commerce enterprises operating in ASEAN are mostly dominated by Singaporean (Zalora, Shopee, Carousell) or Chinese (Lazada under Alibaba Group) enterprises.

The attractiveness of ASEAN online market is marked by the latest move by Alibaba, that launched its initial public offering and spent $250 million to gain 10.35% share in Singapore Post. Still, there are several domestic e-commerce companies at the respective countries (Tokopedia, Bukalapak, Homepro, and CDR King) which have decent competitiveness. However, e-commerce reality in ASEAN is not that huge, which constitutes a little portion of total retail in every member state, except Singapore.

Evolution of e-commerce% of total retail in selected countries 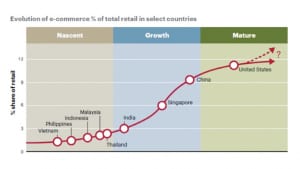 ASEAN established two types of initiative, such as e-ASEAN Task Force and e-ASEAN Framework Agreement. The task force is comprised by government and private actors in order to create ASEAN as an e-space (electronic space). Several aspects are became concern, such as physical, legal, logistical, social and economic infrastructure. For the latter, the framework defines the information and communication technology (ICT). It is not only providing the simple imperative to liberalize the ICT products, services, and investments, but also harmonizing regional tariff and arranging Mutual Recognition Arrangement (MRA). Nine years after e-ASEAN initiatives establishment, ASEAN included e-commerce in its element on ASEAN Economic Community (AEC) Blueprint.

In 2010, ASEAN launched the ASEAN e-Commerce Database as the compilation of the ASEAN countries’ netizen activities and the most active website performing e-commerce in this region. The content is mostly the result of the research on ASEAN netizen behavioural preference when surfing in internet and how they conduct transactions.

Does It Pose as Innovative Integration Catalyst or Not?

The process of integration in digital area –especially e-commerce– is executed by business, but the member states of ASEAN try to take control the process by promulgating the former agreements and future one. In addition, regions nowadays put e-commerce not as a substitute for the conventional economy activities. Dot-com bubble burst at 1997-2003 serves as warning for these regions, not excluding ASEAN. The fact ASEAN are not dismissing this issue but at the same time not putting this into the most priority agenda proves Coppock and Maclay premise.

Nonetheless, the integration and interconnectivity will be concentrated into ASEAN 5 + Vietnam since they are the major economic power in ASEAN. It is estimated these country will reach approximately 483 million internet users by 2020. 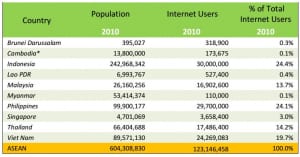 An essential information that can be inferred is digital divide exists. Many attempts are done by ASEAN to tackle this problem with IAI Work Plan III and the past tools. However, it is the fact that the result cannot be seen in several years. To spread e-commerce as vital component in digital integration, recipient countries and local business in the least developing countries in ASEAN, need infrastructure, access to e-commerce, language skill, and higher welfare to reap the technological advantage. Digital integration at the same time adds the new dichotomy in ASEAN, either they are fully integrated (ASEAN 5 + Vietnam and Brunei) or the partially or least integrated (CLM).

Logistic in the ASEAN related with e-commerce still poses as an essential challenge problems in ASEAN countries. With exception of Singapore and Malaysia, the delivery cost of cross-border transaction is still prevalent. E-commerce vendors find it hard to offer cheaper price to consumer. In accordance of the payment, most citizens in ASEAN are still unfamiliar with the digital based. There are less than 2% of consumers in Philippines and Vietnam who use credit cards. ATM/bank transfer is the most preferable payment method in Philippines and Indonesia. Cash is still persistent in Thailand, while Singapore has the high rate of credit payment usage. 73% of this region population is still unbanked.

The cross-border transcending nature of e-commerce presents a new challenge for the digital integration notion. A widely known assumption is when a region is not large enough to support economic actors to have confidence in internal market/region, then they will turn onto international negotiation. The condition will be worsen in the form of reduced regional competitiveness, if the region have no intention harmonize with the global area. ASEAN people will tend to conduct extra-ASEAN transaction rather than intra-ASEAN one if this scenario happens.

Even ASEAN already showed us their responsive action, yet it still faces internal problem. The absence of a binding agreement on e-commerce in regional level and the differences in national legislation on areas that affect e-commerce directly, for example privacy and consumer protection laws, is still prevalent. The issue develops, but the method that ASEAN and its constituting countries utilize does not change. The relevancy of ASEAN way, which put emphasis on national sovereignty, is still on effect and at some point hampering further integration.

At least, we agree that the presence e-commerce as pushing factor stimulates the development on least-developing area in ASEAN in order to be integrated in the digital framework. It cannot be denied that e-commerce gives the local actors chance to interrelate themselves and capture market potential in regional market easier than the conventional way.

After reconsidering the notion of digital integration, it arrives into different new inference. Digital integration via e-commerce is suitable to be a partial integrative factor, due to the existence of digital divide in ASEAN. The approach of ASEAN addressing this issue is by capturing the phenomenon from below (issue ascendancy through bottom-up process), then taking over the regulation formulation (issue management by top-down approach). So we cannot see this process in a dichotomous point of view, while it is combining both two processes.

ASEAN elites are going to devise newer agreement on e-commerce. Problems and challenges has already presented in previous part. As consideration, ASEAN may take lesson from its predecessor in its western counterpart, the European Union (EU). It invents The Digital Single Market Strategy as device to assist small-medium enterprises (SME). SMEs number in ASEAN are quite high, around 88%-99.9% and they employ 52%-97,2% people. ASEAN leaders shall adopt it with adjustment in order to share the prosperity cake with ASEAN people and at the same time intensely integrate ASEAN.

Follow Us
The Battle Against Trafficking in Persons: Is ASEAN Heading in the Right Di...