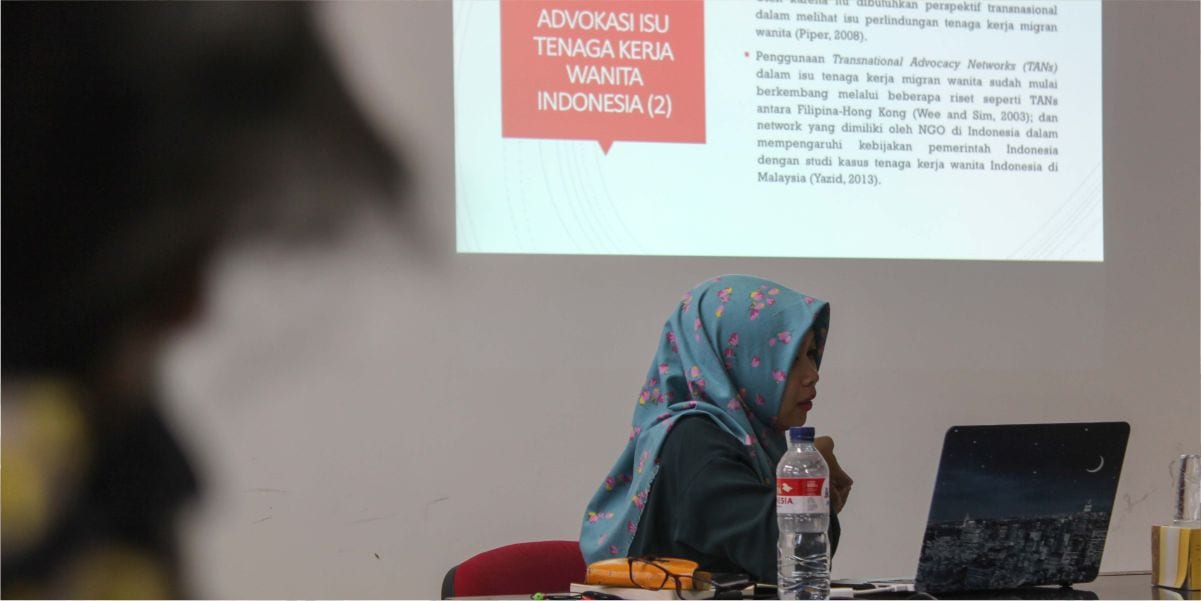 ASEAN Studies Center UGM held the seventh Bincang ASEAN which discusses some problems that Indonesian migrant workers face in several countries. This discussion is triggered by the recent problems regarding the migrants’ workers. Ezka Amalia, a postgraduate student at Nagoya University, Japan, began the discussion by examining the history of the women migrant workers and the problem they face on a daily basis. She addresses the problems surrouding labor migration in the region, such as the feminization of migration and worker’s rights’ fulfillment, in which the workers mostly became the vulnerable due to their role as a low-skilled labor.

Asia is the region with the largest number of domestic workers, with Indonesia, the Philippines, and Sri Lanka being the largest sender country. According to the ILO 2013 data, migrant domestic workers are vulnerable to long hours (99%), not covered by workers law (61%), and do not have weekly resting rights (97%). Most of the problem originated from the lack of knowledge regarding the right of works in the respective countries.

Ezka noted that most of the governments are still focused on controlling the migrants labor instead of protecting the migrant labor rights. Female migrant workers are not a citizen (in the recipient country). On the other words, they are marginalized citizens, which makes the recipient’s countries feel no need in addressing the problems immediately. There is also a heated debate as to whether Hong Kong government (which is autonomous from the mainland China) and the agency should fulfill the rights of migrant workers, which is yet to reach a conclusion. Women migrant workers have yet to understand their guaranteed rights in employment law.

Ezka also highlighted the nature of the migration of transnational female workers, which is accompanied by advocacy activities by NGOs and trade unions. She said that it needs to be involve all of the international actors working in this issue. Therefore, a transnational perspective is needed in looking at the issue of the protection of female migrant workers

To date, the advancement towards the protection of the migrant’s workers are being made; the advocacy from the NGO namely Migrant CARE and a workers union, in Hongkong, for example, the women migrant workers formed Indonesian Migrant Workers Union (IMWU). She conclude that the protections of migrant workers still needs to be put into the heart of Indonesian government’s program abroad.