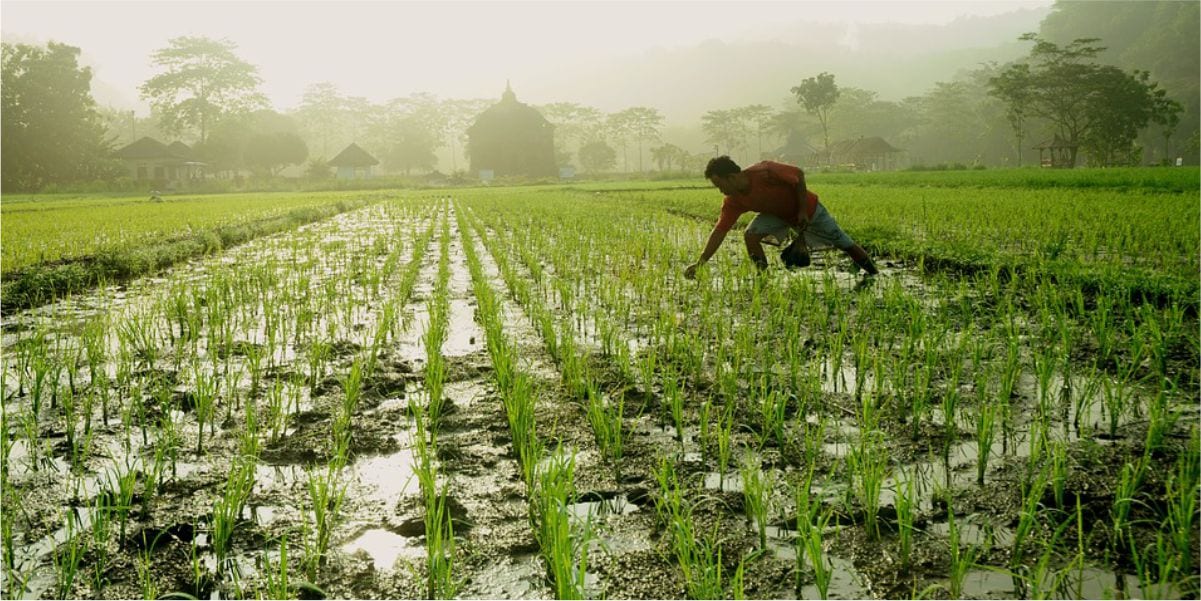 The combination of climate change mitigation and adaptation is essential for millions of smallholder farmers in ASEAN. However, does it consider farmers’ rights and development to achieve a farmer-centered approach? What could ASEAN do to protect the rights of farmers and the environment in general?

ASEAN is one of the world’s largest emitter of greenhouse gases. A Large proportion of these emissions come from the conversion of forests and carbon-rich peatlands into productive agricultural land. This is a prominent issue that needs to be addressed in the 50th anniversary of ASEAN, which has a big impact in the future.

Much of this conversion is driven by the nation’s crop estates (e.g. oil palms, cocoa, and coffee). Although smallholder farmers own only small plots of land, they farm quite a big part of ASEAN’s total land area planted with oil palms. Meanwhile, in Indonesia for instances, under the Nucleus Estates and Smallholders (NES) scheme, a company acquires 70 percent of the land under development. However, as land scarcity drives up the value of unconverted plots, farmers are keen to hold onto a greater share.

ASEAN is one of the most productive agricultural regions in the Asia. In 2012, the region produced 129 million tons of rice, 40 million tons of corn, 171 million tons of sugarcane, 1.44 million tons of soybean, and 70.34 million tons of cassava. However, Southeast Asia is highly vulnerable to climate change as a large proportion of the population and economic activity is concentrated along coastlines; the region is heavily reliant on agriculture for livelihoods; there is a high dependence on natural resources and forestry, and the level of extreme poverty remains high.

A study carried out by Asian Development Bank (ADB) revealed that the mean temperature in the region increased by 0.1 to 0.3 degree Celsius per decade between 1951 and 2000; rainfall trended downward from 1960 to 2000, and sea levels have risen 1 to 3 millimeters per year. Heat waves, droughts, floods, and tropical cyclones have also become more intense and frequent. The same study projects a 4.8 degrees Celsius rise in mean annual temperature and a 70 centimeters rise in mean sea level by 2100 in Indonesia, the Philippines, Thailand and Viet Nam.

As matter of fact, the ASEAN farmers has been practicing organic farming and good agriculture practices for quite a while. Most of ASEAN agriculture programs are aiming for sustainable food production. This effort should be combined with the climate-smart agriculture (CSA) to increase the resilience of the region. The concept of CSA was invented by the UN Food and Agriculture Organization (FAO) in 2010 to sustainably increases productivity, resilience (adaptation), reduces/removes greenhouse gases (mitigation), and enhances achievement of national food security and development goals.

There are several ways to mix these sustainable agriculture practices. Insurance is a good example which protects farmers from crop losses due to bad weather and encourages them to innovate. Weather index-based insurance schemes can help secure farmers’ livelihoods and enable them to invest in climate-smart technologies. It will improve million farmers’ adaptive capacity with the help of climate-smart insurance. Through close collaboration with farmers, civil society, governments and researchers, it will support the concept and practice of climate-smart agriculture in farmers’ fields and in global initiatives.

For many smallholder farmers, modern, chemical-based fertilizers are unaffordable. Traditional slash and burn practices are the alternative method, but they have caused an increase in the soil’s mineral content. As fires become more frequent, however, soils begin to degrade and farmers are left with an area of land with limited fertility.

Farmers’ shifting cultivation practices also cause damage to local river systems through increased sediment discharge and the release of chemical fertilizers, harming fish and other aquatic life. Some environmental groups have claimed that palm oil companies committed to ending deforestation and sustainable production, are, in fact, encouraging slash and burn by smallholder farmers so as to enlarge plantation size.

On top of this, climate change impacts are now emerging as a serious threat to progress in agricultural development. With a strong dependence on climate-sensitive natural resources to support their livelihoods, smallholder farmers in ASEAN are highly vulnerable to climate change. To cope with these challenges, approaches to this issue are becoming even more complex, combining the more established practices of environmental protection and poverty reduction with emerging concepts related to global climate change: mitigation and adaptation.

In Indonesia, from 2002, biologist Willie Smits started to apply an approach to rebuild the rainforests in Borneo. The program has been empowering smallholder farmers to find alternatives to harvesting forests. It was started with a team of 100 local farmers to restore 5,000 hectares of devastated forest. To grow, protect and preserve the forest land itself, the program offers local farmers free land to plant crops in the forest. The government has pledged to make this concept a national project and to be replicated in eight provinces in Indonesia. This approach should also be replicated in other ASEAN countries.

Investing in climate action by smallholders is showing incredible impact in terms of food security, biodiversity improvement, and carbon mitigation.

Last year, the ASEAN farmers discussed opportunities and challenges of family farming with the European Union in order to enable the smallholders to effectively engage in modern business and market practices and to provide more access for them to new and more sustainable farming practices.

However, doubt still remains about sharing the burdens and benefits of the program equitably and fairly with landless farmers, since the rebuilding program focuses more on forest biodiversity, not on a farmer-centered approach to development. What is needed to protect farmers’ rights? It is a question of climate justice.

Climate justice affirms the disproportional impact of climate change on frontline communities—such as farmers—and promotes their solutions to achieve a just transition for people and the planet. One such solution that lies at the nexus of food sovereignty, territory/land, and climate justice is agroecology, a practice that combines local agricultural knowledge and culture with modern scientific insight. Sustainable farming modeled on agroecology can actually return CO2 to where it belongs—the soil (not the atmosphere).

This would offset from 24 to 30 percent of all current global greenhouse gas emissions, through sustainable production, possible, in part, through the decentralized production, collection and use of energy. Through vibrant family farms packed with biodiversity, often on collective territory, agroecology nourishes people and heals broken ecosystems. In this sense, climate justice and food sovereignty are acts of political resistance. They exist outside the corporate control of the food system—thanks in part to their autonomy from external inputs (such as fertilizers and pesticides)!

These solutions enhance the productive potential of the land. ASEAN needs to move forward to this approach, not merely about the connection between agriculture and food, but also climate and environment.

Ibnu Budiman, MSc Candidate in Environmental sciences and climate studies in Wageningen University, Netherlands. Earlier version of this article has been published at The Jakarta Post, co-authored with Hannah Barrowman (Australian National University)

Follow Us
ASEAN After 50: Is the ‘ASEAN Way’ still relevant?

ASEAN After 50: Reflecting ASEAN as Collective Identity
Scroll to top
We use cookies to ensure that we give you the best experience on our website. If you continue to use this site we will assume that you are happy with it.Accept