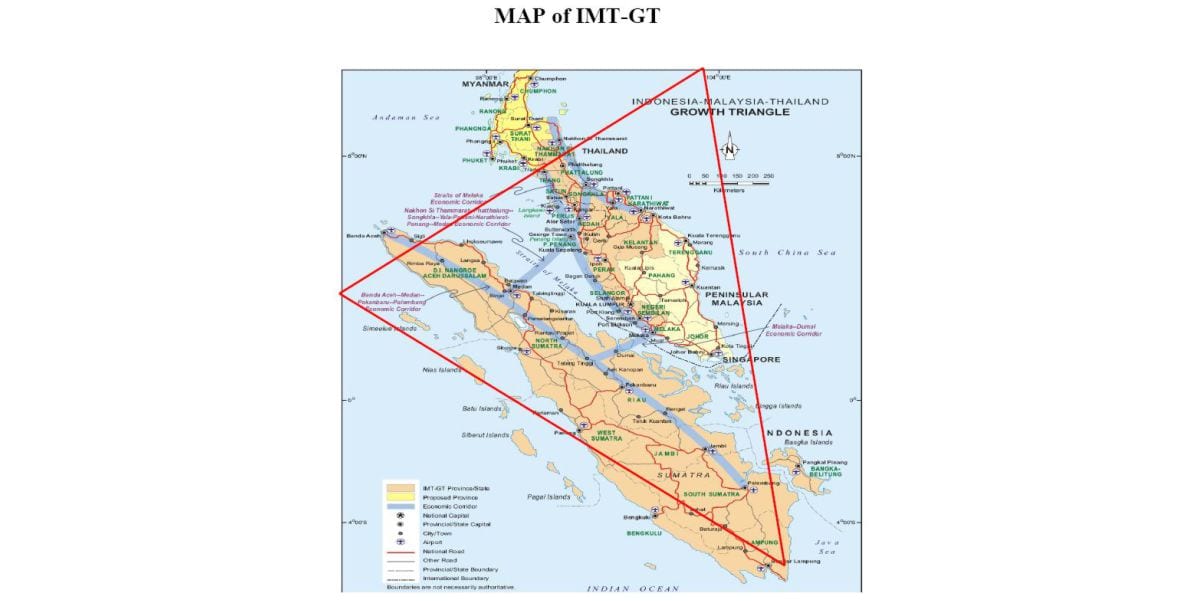 While the meeting has likely focused on infrastructure cooperation reflecting from the attendance of Ministry of Transport from the respective countries, Halal tourism as the new agenda can serve as a push-factor for both national and sub-regional economic growth.

Growth triangles are a unique form of international cooperation, which takes advantage of hitherto cross-border complementarities within geographical propinquity. Like Special Economic Zones (SEZs), they receive additional policy focus as a designated geographical area with the goal of accelerating economic activity.

However, they differ because growth triangles straddling two or three state borders, and exploiting economic complementarity between a metropole and periphery. The metropoles have strong industrial sectors, financial markets and infrastructure, and highly skilled labor. At the same time, it suffers from a shortage of unskilled labor and land, where periphery grabs this supportive role.

Looking specifically on the issue of Halal tourism provides a view that these three countries have adequately put its concern to this issue as one of many potential economic field for national economic growth.

Committed to establish itself as a center of Islamic civilization, Malaysia has enacted the “Halal Master Plan” program. The program is organized into three phases, namely establishing Malaysia as a world center for Halal integrity and prepares for industrial development (2008-2010), establishing Malaysia as one of the favorite locations associated with Halal business (2011-2015), and expanding the geographic footprint of Malaysia as the center of Halal development companies (2016-2020).

Furthermore, there is also an instrument of standardization of services in Malaysia, the MS2610: 2015—Muslims Friendly Hospitality Services—Requirements. The regulation contains three important components related to the supply chain of Halal travel, namely the principle of providing accommodation, tour packages, and tour guides based on Islamic principles.

In addition, the establishment of standardization rules is not initiated by the Malaysian government. Rather, it comes from the voluntary actions of actors in the tourism sector.

For Thailand, up to 2015 there are some 3,600 companies in Thailand hold the overall Halal certification, which covers 120,000 kinds of products, with export volume increase of 10 % per year in order to maintain Thailand’s position as world’s fifth biggest exporter of Halal products.

The Halal industry in Thailand is predominantly controlled by the Central Islamic Committee of Thailand (CICOT), which is supported by several institutions, such as the Halal Science Center (HSC) Chulalongkorn University and the Institute of Food Research and Product Development (IFRPD) Kasersart University.

In contrast, Indonesia does not show any significance in its Halal tourism. Although it has achieved prestigious awards in 2015 and 2016 for the nomination of the Best Halal Tourism Destination Awards through the initiative implemented by West Nusa Tenggara province, Indonesia possesses minor practical development.

Having Asnawi Bahar the Head of Association of Indonesian Tours and Travel Agencies, he mentioned that the winning of such international awards do not represent any practice for the development of Halal tourism. Rather, it works to frame that Indonesia is a country with major population of Islam.

In fact, RI Ministry of Tourism has repealed the only one regulation related to Halal tourism last year, namely Regulation of the Minister of Tourism and Creative Economy No. 2/2014 on Administration Guidelines of Sharia Hotel.

In this sense, the question thus dwells in whether Halal tourism can be institutionalized at the sub-regional level for the sake of ‘shared’ economic cooperation for Indonesia, Malaysia, and Thailand.

Having Indonesia, Malaysia, and Thailand put serious concern on the development of Halal tourism the cooperation between these three countries will promote Southeast Asia as a ‘halal hub’ for the global Halal market.

However, in our forthcoming chapter in book, my Malaysian colleague Ho Yi Jian and I perceived that the asymmetric relations between Indonesia, Malaysia, and Thailand are unlikely to advance the trilateral economic cooperation.

In general, we argue that the Malaysian approach towards this sub-regional cooperation is a specific synthesis between establishing a political project for its own capacity building domestically, and as a way to create regional ties, but remains resolute to maintaining the centrality of the sovereign, unitary state.

In fact, Indonesia should be more ready to develop its Halal tourism if only Malaysia and Thailand are unlikely to disperse the potential of this new niche markets.

Follow Us
Book Review: ASEAN in 2017, Regional Integration in an Age of Uncertainty